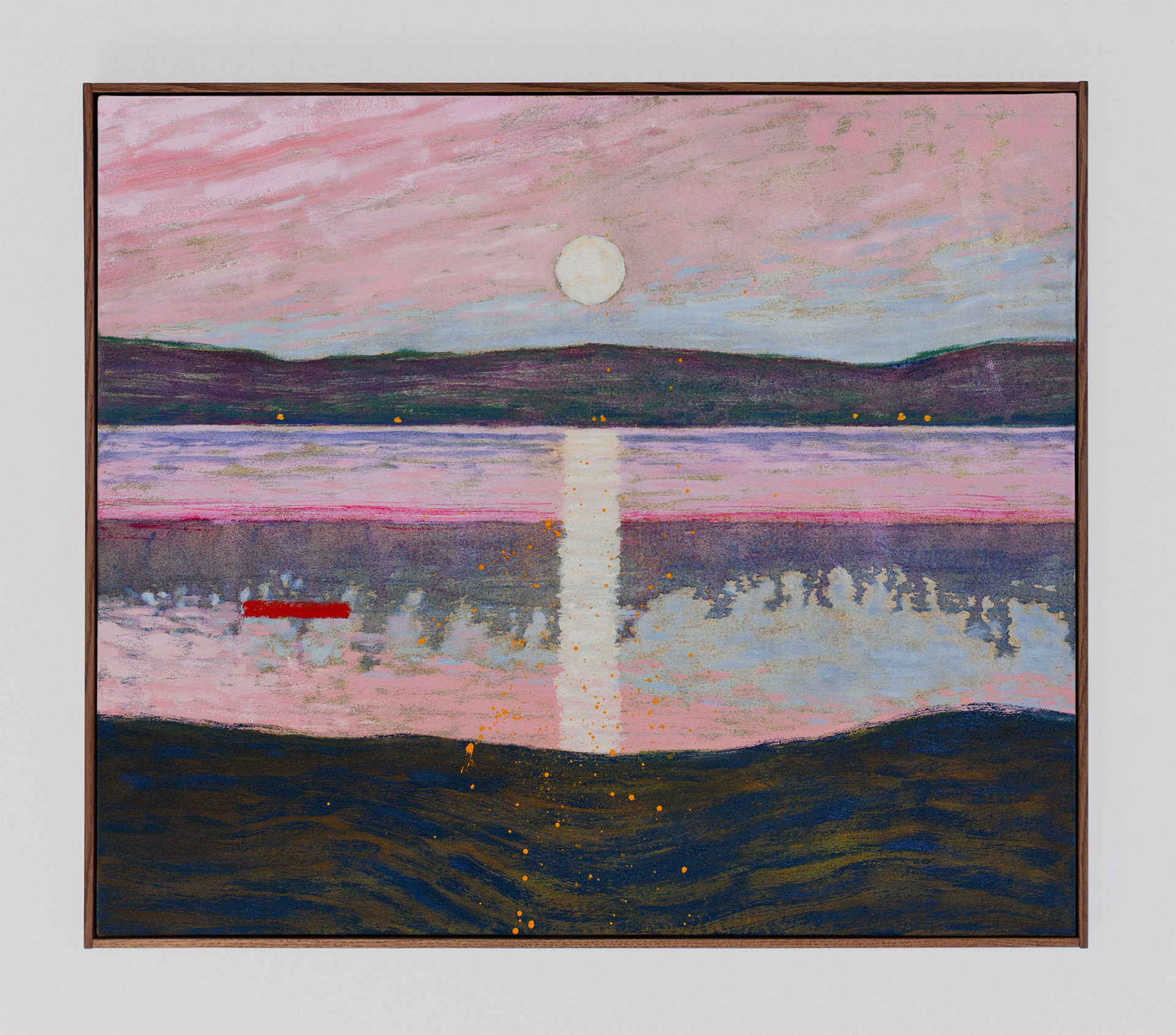 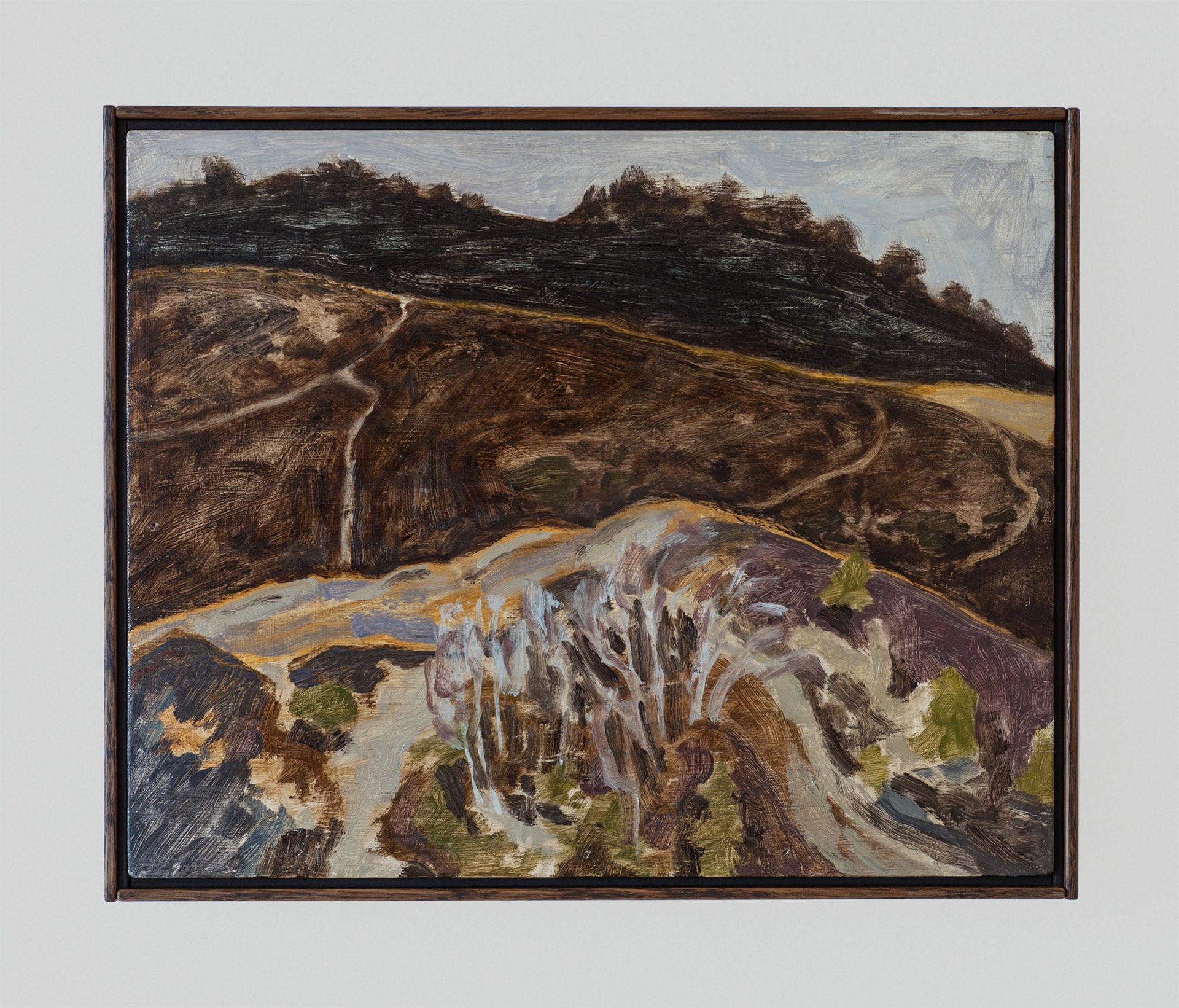 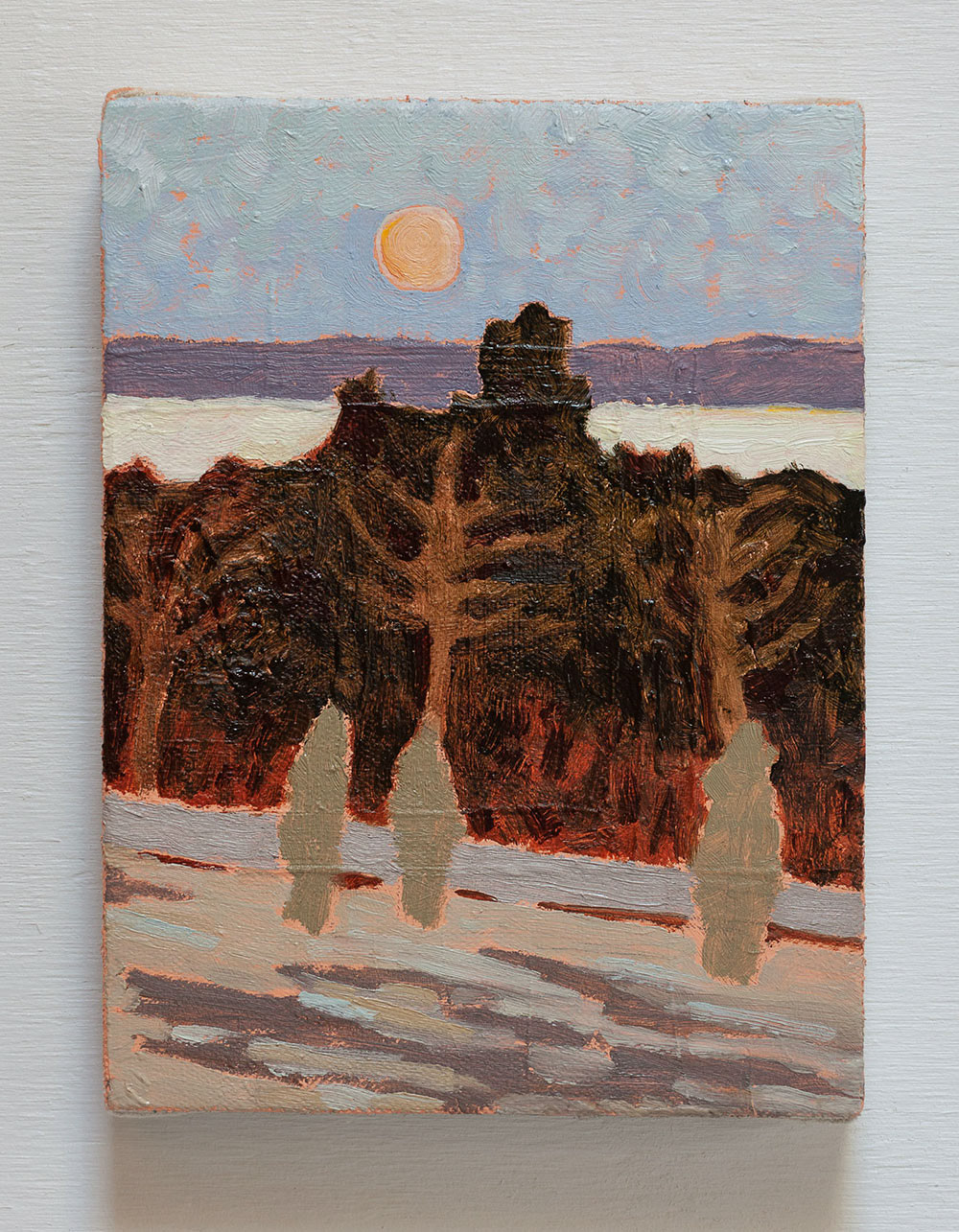 I notice that a lot of your paintings are painted with a color palette close to that of autumn season. Is it a conscious choice?
This is not so much a conscious choice, but more of a coincidence. I was born in September, and in the northern hemisphere that is the autumn season. I have always held an idea that the season you are born in has a subtle influence on your preferences throughout your life. Perhaps it doesn’t, I’m not sure, but I like this idea so I hang on to it. When I was a kid, I always preferred the bold pack of crayons over the regular color pack. The bold pack had deep navy blues, rich browns, dark warm reds, ochres, umbers, and forest greens.
Also, my ancestors are from Scotland, England, and Japan. These are all islands with many coastal villages. So I come from coastal people — blue people — people who live close to water and work on it. I have never lived more than 35 miles from a major body of water. Where I live now is in the center of a narrow peninsula that is only two miles wide. We are surrounded by Lake Michigan to the north, east, and west. I feel whole when I am near the lake or sea, and I feel anxious when I am away from it. Blues are complemented by the warm colors. Maybe this is why my palette tends toward the autumn spectrum — because it is in tune with blue like a musical chord. These are the notes that I know how to play. 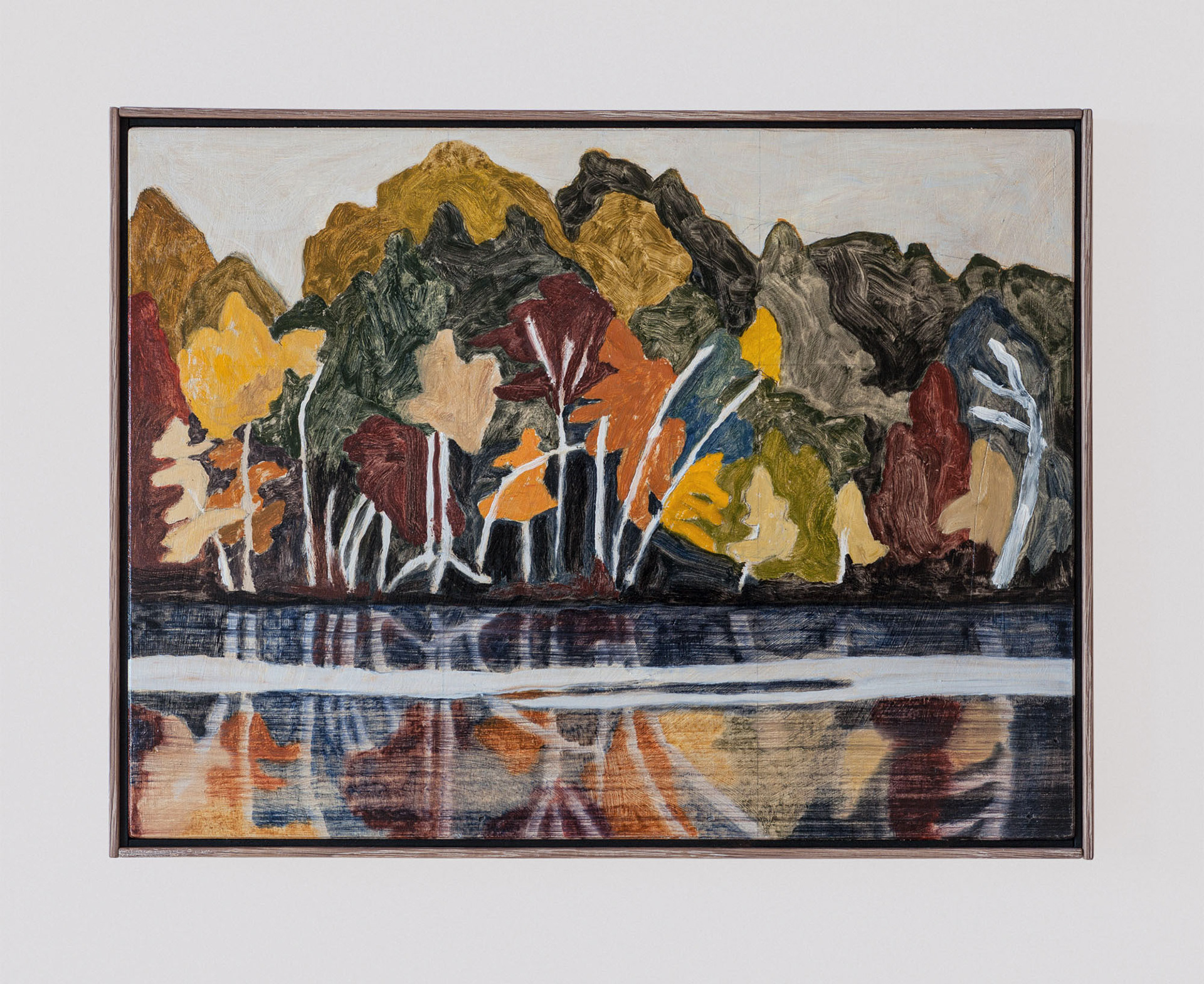 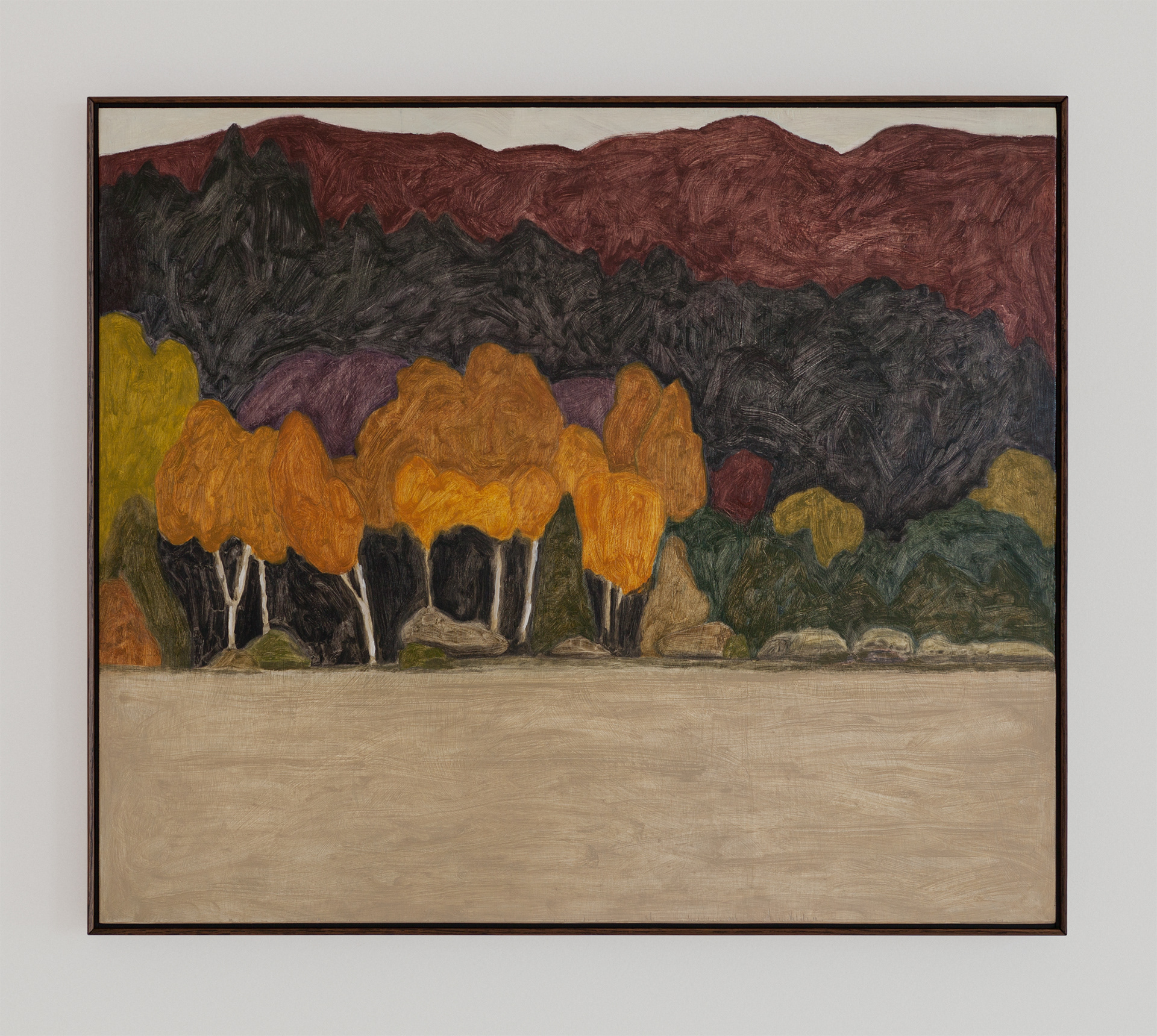 Your paintings are either figurative, with distinctive shape, or almost abstract : colors and shapes tend to mix.  Every painting is really expressive. Could you speak about your creative process?
I want a painting to look like a painting — like something made with paint. I like how there is something true about a painting that is not shy about showing that it is made with paint. It is like embracing your nature, and being proud of what you are. Auerbach, Kossof, and Soutine did this very well. I like oak trees to be gnarly and twisted and to possess and boldly express the characteristics that are unique to an oak tree. I like fish to be shiny and almost metallic looking, and to swim and move in ways that are slippery and fishlike.
If I wanted to have a picture of something that looked like the thing it represented, I would use a camera as the tool to make that picture, because that is what a camera does well. With painting, I want something other than a picture of the thing’s appearance. I want a picture that shows the nature of the thing — it’s spirit, it’s internal character — not simply to contemplate the thing that is shown, but rather, to hint at vaguely described emotions by using the landscape or object as a metaphor.
For example, I have been painting some small duck paintings for the past few months. I call them “Decoys” because that is their function for me. I start with the idea of a duck, but I am not actually painting ducks — they are decoys. I am painting these small pieces that are influenced by ducks in order to loosen up and get comfortable with the paint before working on larger paintings. I paint them as quickly as I can. I am not trying to paint them to look like ducks. In fact, I am trying as hard as I can to make them NOT look like ducks, but they always end up looking like ducks. How is this so? Well, it is because a duck is an unusual thing. Ducks have a lot of character. They have shapes and colors that only ducks have. Ducks are uniquely duck like. I just think of “duckness” and experiment with rich colors, and I move the brush around in ways that I don’t usually move the brush, and I just play with the paint while thinking about the whistling sound duck wings make when they fly. Then, without looking at ducks or even trying to paint a duck painting, I end up with a duck painting anyway because I was thinking about the character of a duck; the spirit of duckness.
Of course, it doesn’t have to be a duck. You could practice this with basically any subject. It is an exercise that highlight’s the mind’s ability to construct meaning out of meaningless visual matter, in a way that is similar to the mind’s ability to make narrative out of instrumental music without the aid of visual cues. This is the type of painting I want to create. Paintings that show the spirit of a thing without actually showing an articulated rendering of the thing itself, and using the feeling that a thing can give you — its essential nature — to build metaphors that contemplate something true about our existence. 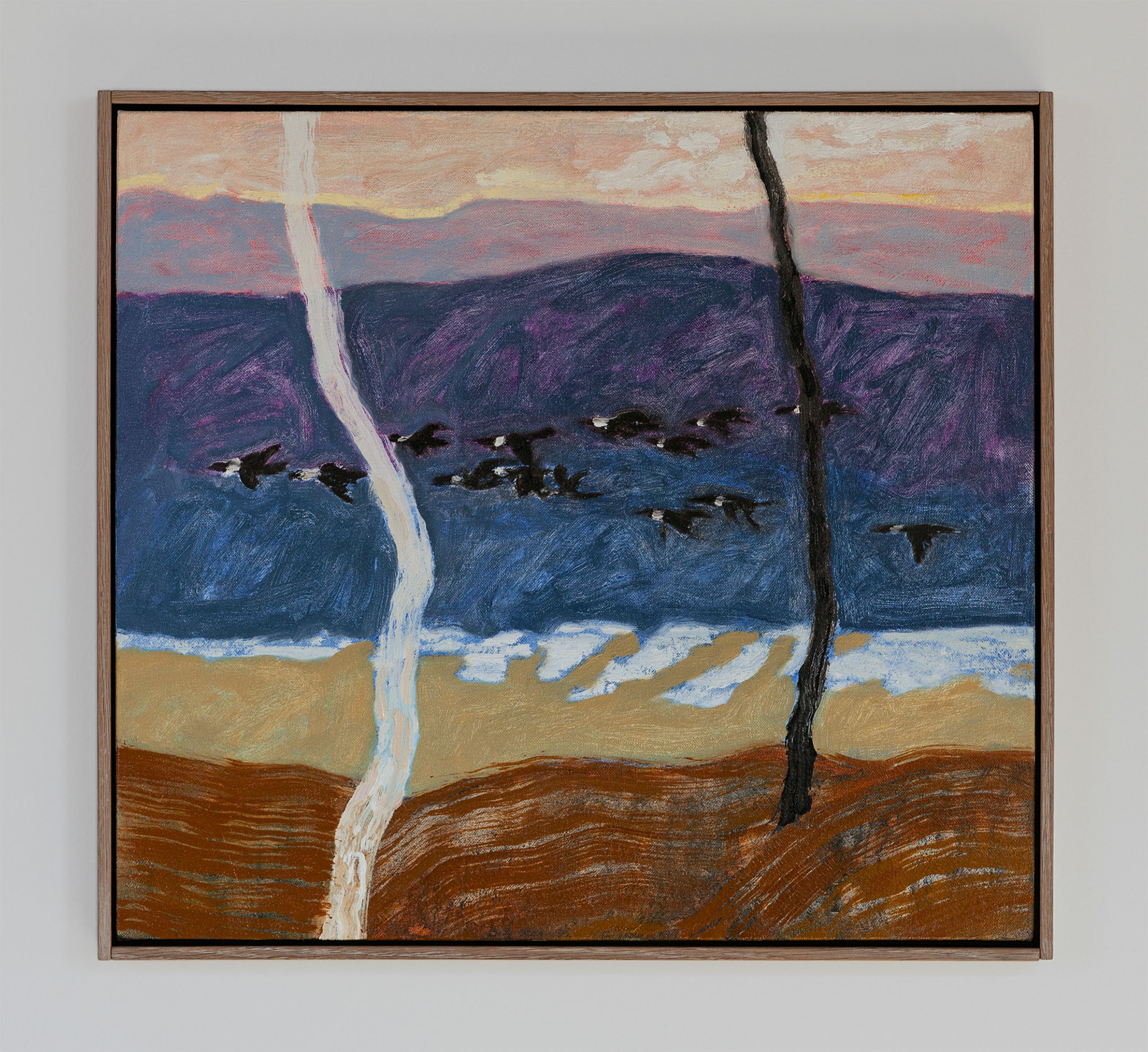 The paintings seem painted from the same place. Is it from your home place? Or every painting is created from your self imagination?
Almost all of my work is done within 10 miles of my home. I begin by making most work on site, and then I finish it in the studio. Sometimes I make pieces entirely in the studio, but almost always with some sketches from life for reference to build the composition. I like to work with a combination of studies from life and memory/imagination in the studio because this is how a lot of evidence of thought can be seen; alterations to the composition or colors, painting over areas or wiping them away, etc. All of this accumulated thought has a look to it that shows the mind being present and engaged with the real world, and this is what I like to achieve.
What are your main artistic inspiration?
Going for a walk, a swim, or riding my bike is where most inspiration comes from. Then while listening to music I’ll remember some of the things I’ve seen and develop an idea of what to paint and how to paint it. Of course, I look at a lot of art too. I am most drawn to early 20th century painting and sculpture, but also a lot of early renaissance work. I love the Ashcan School in America, and the Secessionist movement in Vienna. I lived in Vienna for a few months, and seeing Bruegel and Schiele’s landscape work left a very strong impression on me. I am also very fond of Lois Dodd and Jane Freilicher’s work. These two brilliant women are really the ones who brought me back to painting. I was making a lot of furniture, but then listened to a few recorded Lois Dodd conversations and began painting again. Then Kasmin Gallery in New York had a show of Jane Freilicher’s early New York City paintings, and I have not stopped thinking about them since then. Tom Thomson and the Canadian Group of Seven are a big influence. We live in the same northern region of the Great Lakes, so the landscape and quality of light are similar. David Milne is also a big influence, as is the School of London.
My wife is a weaver, and she has a few Anni Albers books by her loom in our shared studio. One of my Canadian friends who lives in British Columbia says that she sees a very strong weaving/tapestry influence on the way I paint, and I think she is right. A couple years ago we were visiting my wife’s father in England, and were fortunate enough to catch a Bonnard show at the Tate Modern. Bonnard and Vuillard are heroes of mine. In Chicago we have Vuillard’s large painting, “Landscape: Window Overlooking the Woods,” hanging at the Art Institute. I have been in love with this painting since I was a small boy. Philosophy is also a large influence on my work, but I try to avoid thinking about my work in too much of an intellectual way. Whenever I set out to make a painting that is very heady, it often turns out terribly. So I try to think a little less and feel a lot more. This is an ongoing struggle, but I just read philosophy in bed and don’t bring any of the philosophy books into the studio.
Do you have any future projects to share with us?
I am working on several new pieces that will be included in a group show at Philip Martin Gallery in Los Angeles later this spring, and I have some work included in Issue 21 of ArtMaze magazine. I like having shows in my studio around the first half of October when the apples are ripe. The weather and color is absolutely perfect where we live then. I try to have a bunch of furniture, sculpture, paintings, and intaglio prints ready to show at my studio for the October show. Having your work on display in one room is a strange way to kind of see yourself as other people must see you. It’s almost as if you can stand outside of yourself and look at your own mind objectively. More than anything else, this is probably why I make art in the first place. It is as the Greeks said, “To know thyself.” Andrew Wyeth said he simply painted the life that was around him, and that is basically all I am doing. I try to really feel this place where I am, to get to know its character. I paint the places that appeal to me most in a way that lets my internal thoughts and feelings show. I am very grateful that I get to spend my time making work in and around my studio. 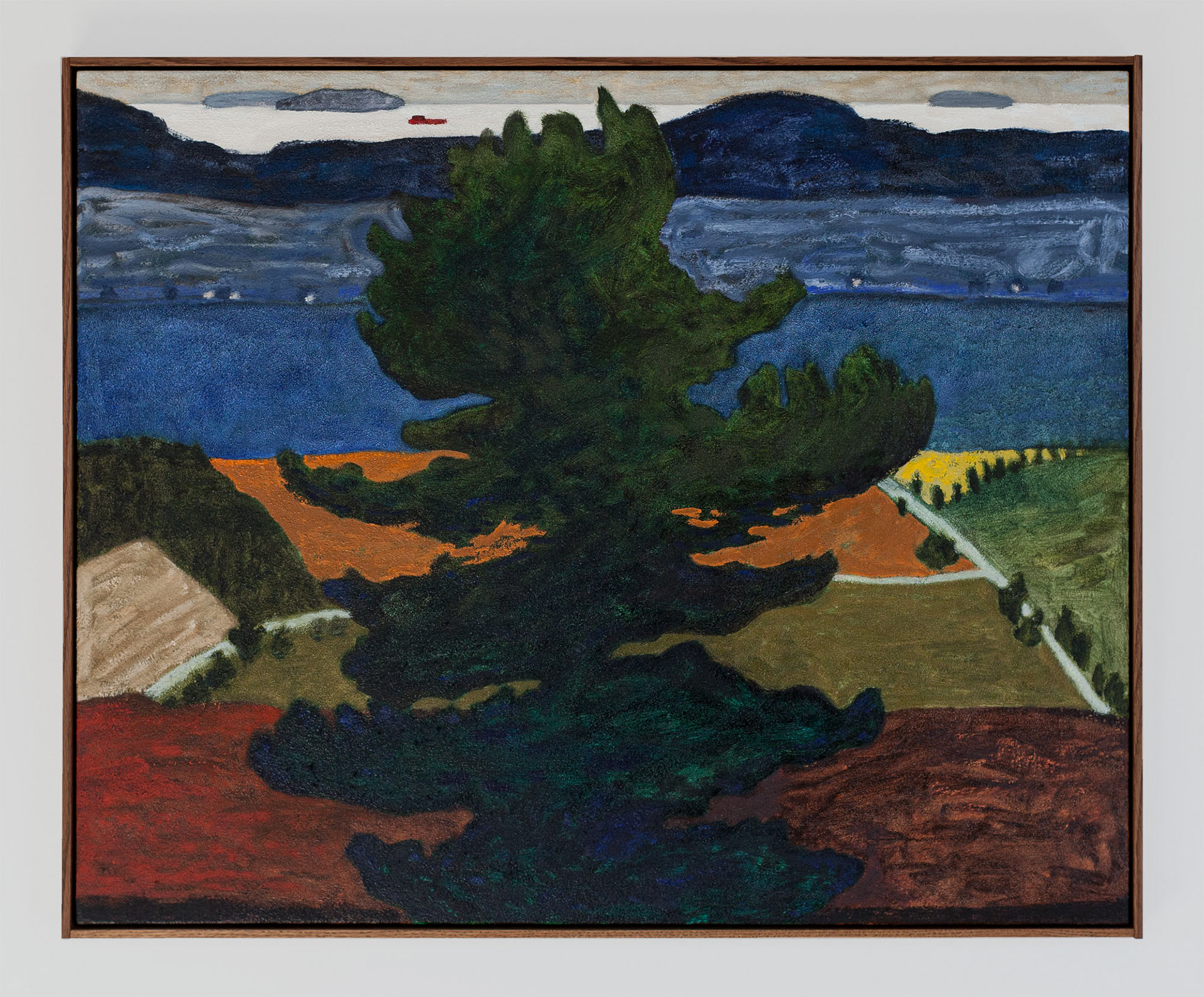 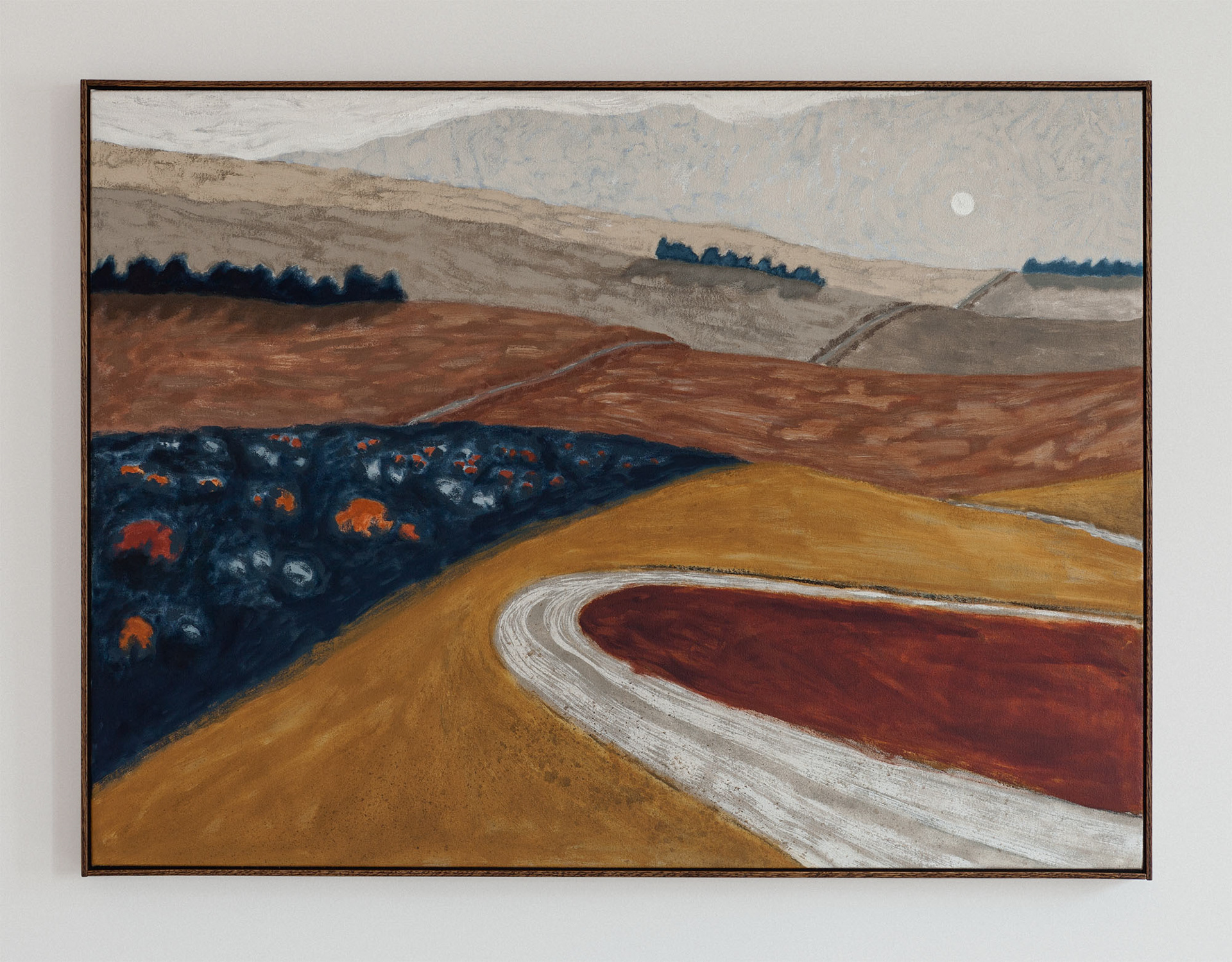 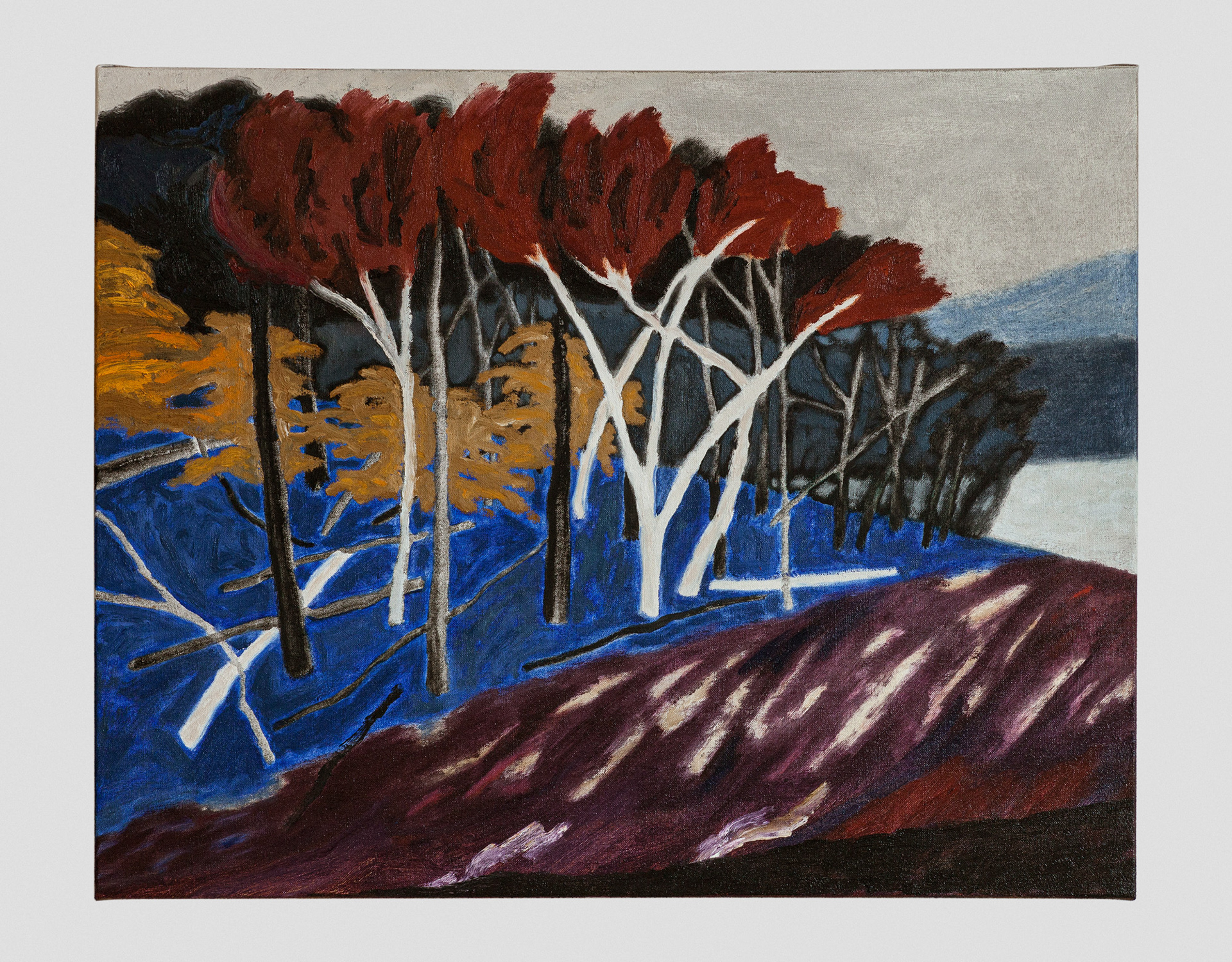 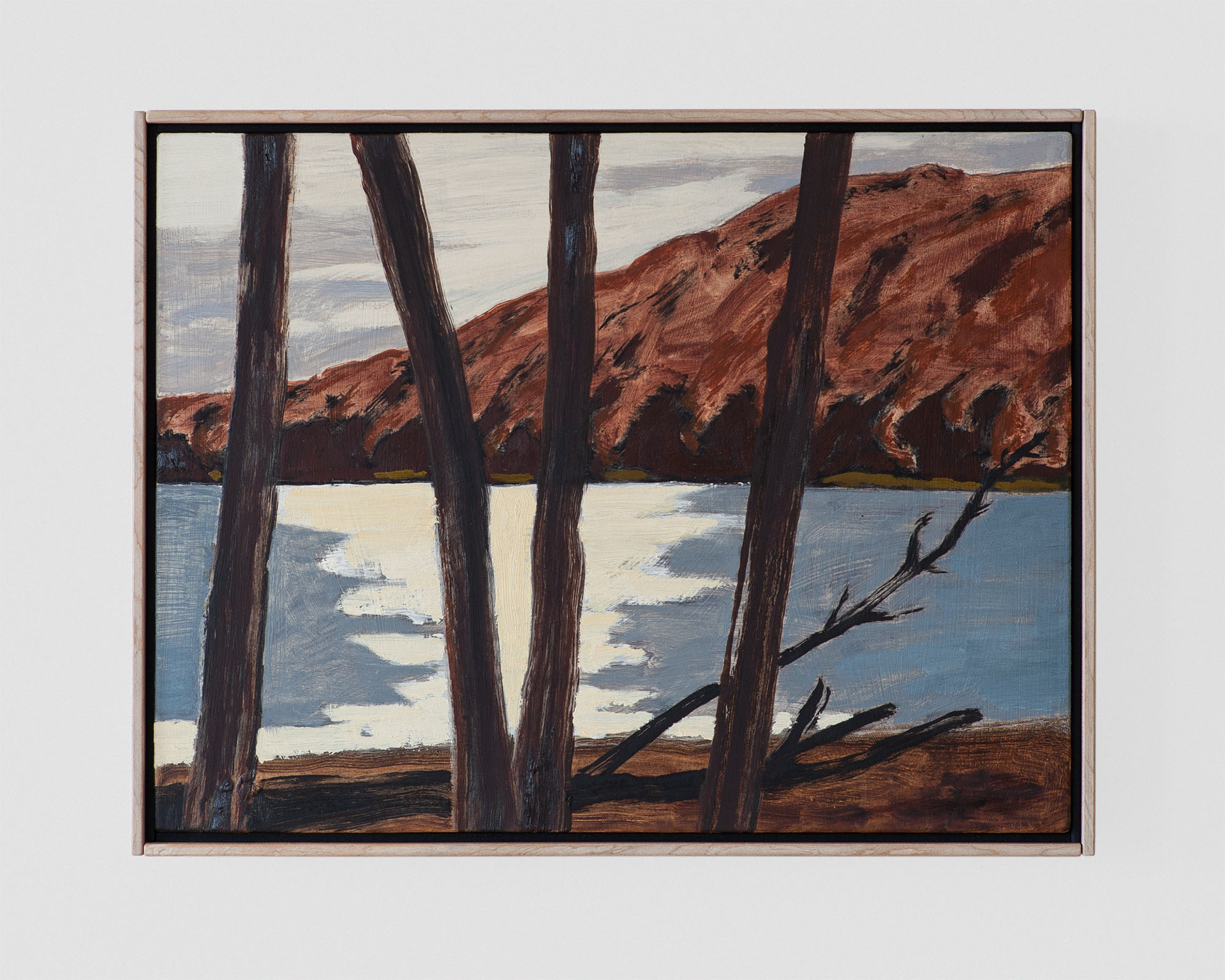 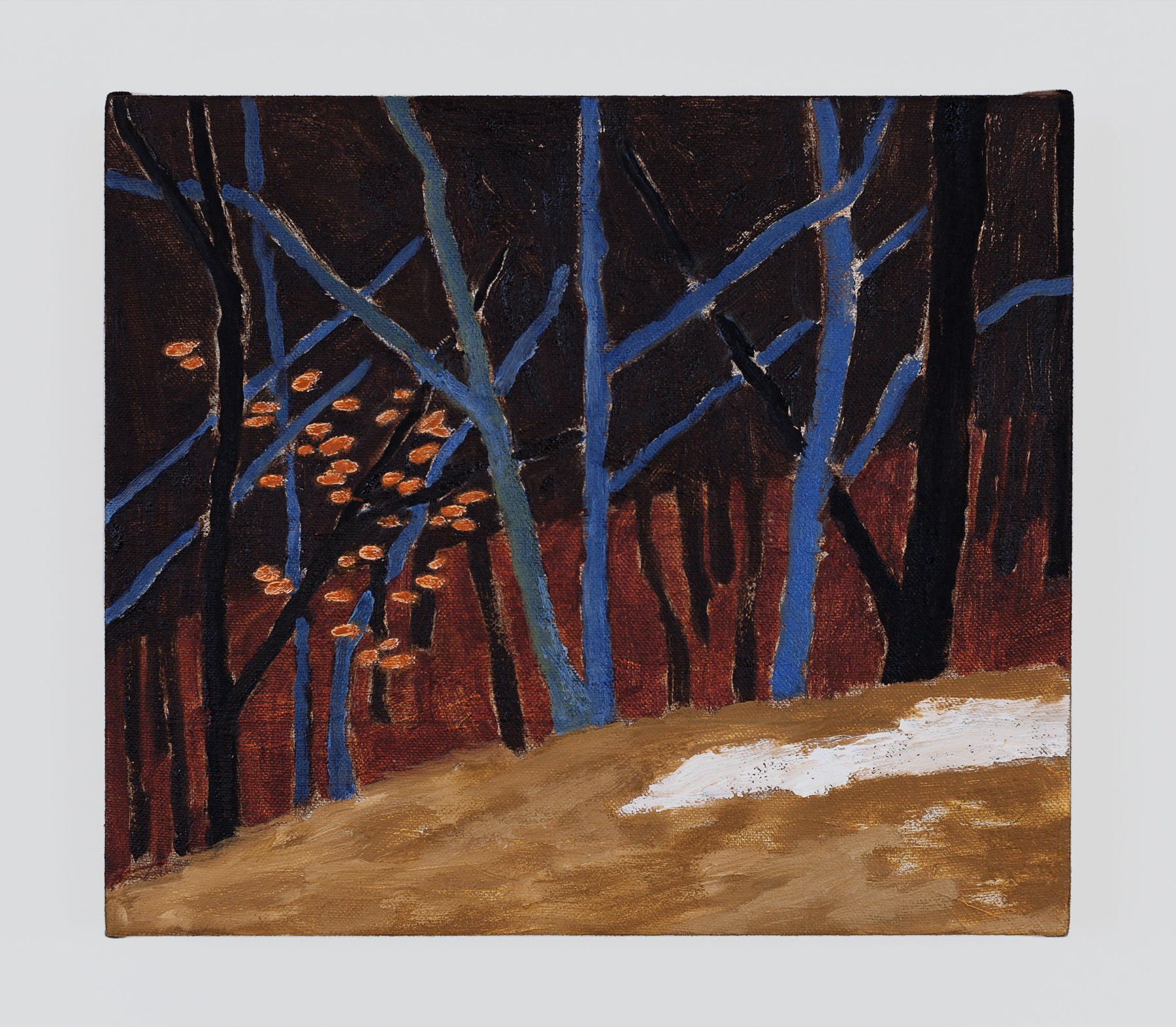