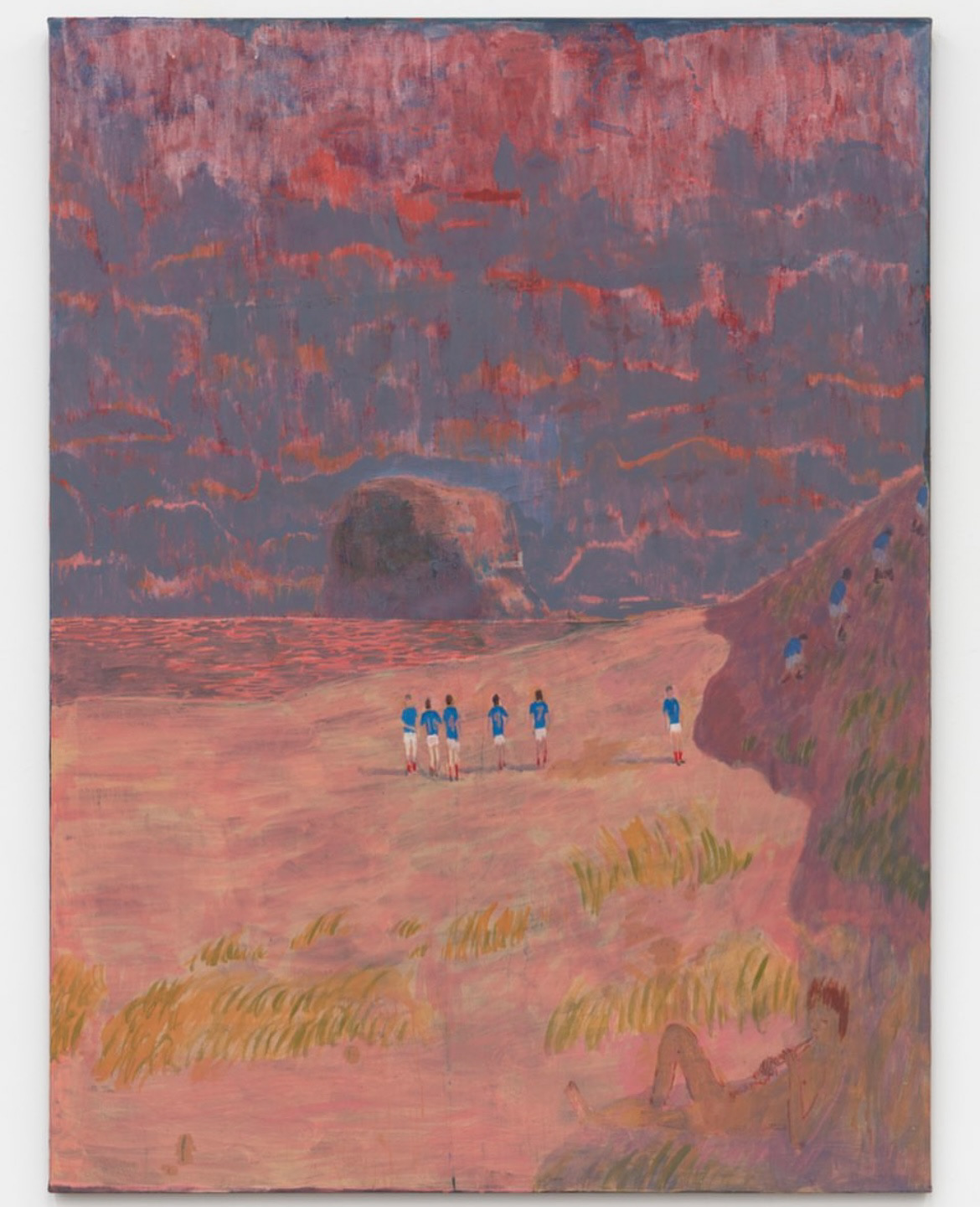 " I think of paintings themselves, their format, their condition as a kind of interior space. Putting aside ideas of painting in an ‘expanded field’, paintings are generally rectangular or square spaces, activity within a frame, spatial boxes; in a way, like a room. "
Andrew Cranston
Could you introduce yourself ?
I was born in Hawick in the Scottish Borders in 1969 and am based in Glasgow. I am a painter. I studied Fine Art  in Manchester, Aberdeen and London between 1989 and 1996.
I am represented by three galleries: Ingleby gallery in Edinburgh; Karma in New York; Modern Art in London.
If your work is figurative, the subjects are abstracted into the background and the superimposed colours dissolve the contours. Through your great work of materiality and arrangement of colours, we are directly projected into a precise atmosphere, dictated by the coloured and luminous harmony. Is not being too explicit in your narratives a way for you to create a form of mystery and leave everyone free to project themselves into it?
I think it’s an ongoing battle between specificity and the generic. I paint things out a lot. I do want to leave space for the viewer to do some work themselves which I think is one of the aspects that attracts me to employing negative space and making the in-between spaces often more concrete. You see this very obviously in Vuillard’s work, and in Matisse, Morandi and David Milne. I have masses of research material that I refer to- books on every conceivable subject- and these can be an initial trigger or aid for a work in its development but it is almost always crucial for me to also put aside photographs, drawings, etc and  at some point  work on a painting in its own terms and not impose something external. 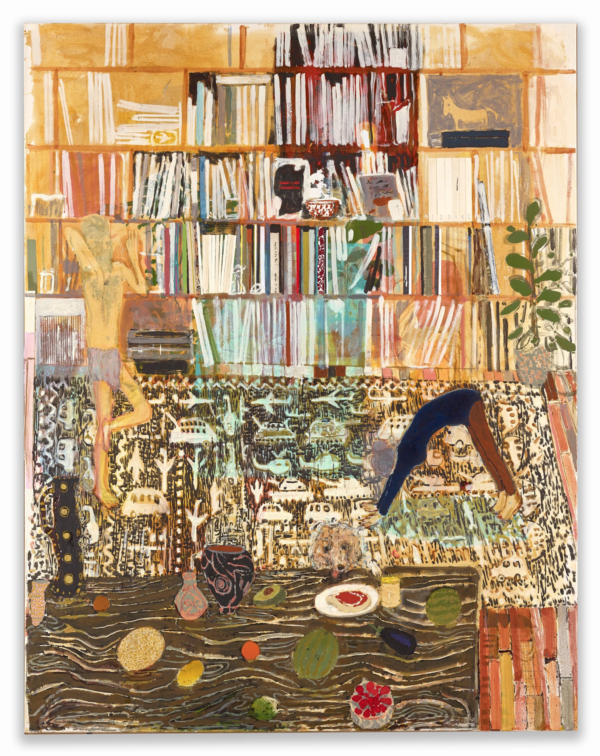 You mainly represent domestic scenes in interiors. Your care for the decorative arrangement reminds me of those of the painter Vuillard. What do you like about the representation of domestic interiors?
I think of paintings themselves, their format, their condition as a kind of interior space. Putting aside ideas of painting in an ‘expanded field’, paintings are generally rectangular or square spaces, activity within a frame, spatial boxes; in a way, like a room. We can only really ever be in one room at a time, It has useful limitations or constraints. My work really moved indoors when I became a father ( in 1999). I started spending more time indoors, seeing the outside framed from the inside, noticing opportunities to use the domestic realm as a subject.
I like the domestic as a sort of anti-heroic subject. it is the heroism of everyday ordinary life, which James Joyce celebrates in his epic ‘Ulysses’.
You seem to be very creative and inspired by your daily life and surroundings. Like photographs, you use very photographic framing and seem to witness your daily life and that of your entourage.  Is this the case? And can you describe your creative process?
I let images and ideas come to me rather than go looking for them. They are under my nose. There’s looking and there’s seeing; seeing the opportunity in a situation. Next to imagination I think awareness is the greatest tool an artist has: to be conscious of and observe your surroundings and awake to the particular nature and qualities of them.
Probably  like everyone I take photos on my phone as a matter of course, each day accruing dozens added to thousands i have on the phones storage, so many you forget what you’ve got.
My process is haphazard and somewhat shambolic. I have a few methods which are constantly mutating. I draw a lot, and in different ways- observational drawings and Sometimes just rambling doodles.
Sometimes I just make a ‘straight’ oil painting and am so relieved and refreshed by it, but mostly I have obstacles in the way, put there by myself. I make paintings with oil, enamel, watercolour, or pigment used with various binders: encaustic wax, gum Arabic  or rabbit skin glue. I dye fabric and also draw with bleach. My approach has much in common with printmaking, thinking of the image and colour in layers, separating and breaking down the image into parts. 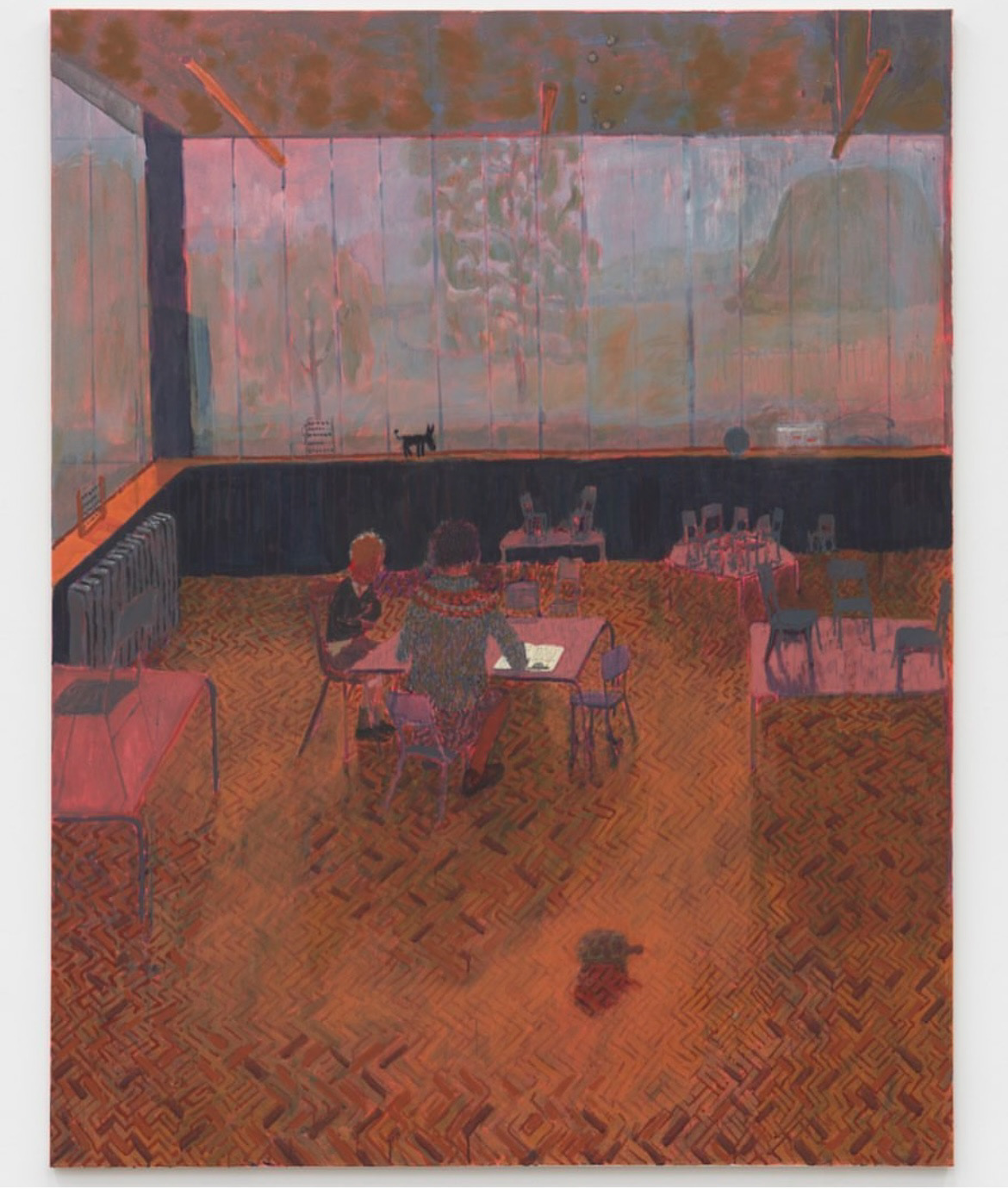 ´Let’s talk about this story of yours’, rabbit skin glue and pigment on canvas, 2021

Nature and landscapes also seem to be central to your work. They take a large part in your compositions and your figures often seem small in front of them. These scenes invite you to travel. Can you tell us a few words about your connection with nature and landscapes?
I grew up in a fairly rural environment, on the very edge of a small town in the Scottish Borders which is relatively sparsely populated, the rolling hills not being good for much except sheep farming. And great for walking of course which I did all the time, especially around Hawick. I can visualise every patch of it.
The singer Nick Cave was once talking about how when he wrote a song and it mentioned a river or a tree, that it was a specific river or tree he had in mind, one he grew up with and that grew into him. I feel similarly. Even though I have been in some form of exile from this place geographically for more than 30 years, it is In my minds eye, and always informs my sense of landscape. Then there’s the actuality and there’s also the idea of the place, a kind of mythic version.
I identify with the playwright Dennis Potter where he talks of his childhood landscape ( the Forest of Dean on the Welsh/English border)
“It's a sort of mythic Forest of Dean. There's the real one, with the same signs and stresses as the real anywhere, and there's the other one, the one I grew up as a small child in, and those rather ugly villages in beautiful landscape.
And for me, ( mythically) of course it was the Holy Land - I knew Cannop Ponds by the pit where Dad worked, I knew that was where Jesus walked on the water; I knew where the Valley of the Shadow of Death was, that lane where the overhanging trees were.”
Dennis Potter interviewed by Melvyn Bragg, 1994
I think in Scotland generally, and in comparison to England,  landscape and a sense of nature is a big part of its culture, and for everyone. Scotland is a longish country with a small population much like Norway and New Zealand. The capital city, Edinburgh has a small mountain ( Arthur’s seat) practically in its centre, its castle sited on a volcanic plug. Even in Glasgow, the country’s largest and most urbanised city the nearby Campsie hills, or the mountains at Loch Lomond are visible and have an everyday presence. 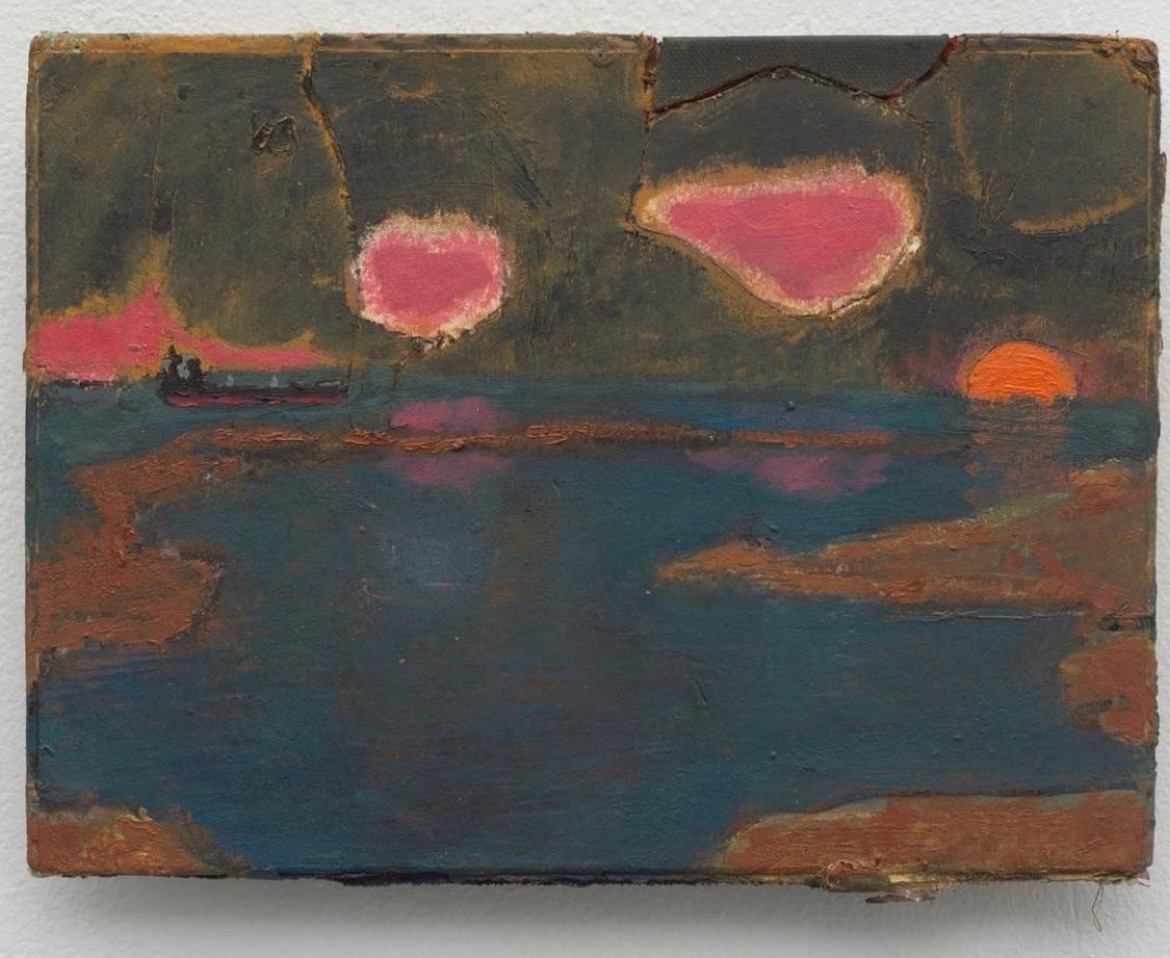 You explore book covers as a medium, often leaving the book spine visible with the title visible. Why this medium and how did you come up with this idea?
My first loves art wise were record covers, book covers, posters, graphic arts rather than painting so that is something  I still feel a connection with.
I first consciously worked on a book cover during a residency in Düsseldorf in 2006. One day I had ran out of things to paint on and found some old books in a drawer. On the one hand it was and is just something to paint on, a convenient board and often canvas covered and on the other It seemed significant that it was a book, the status of books in our culture. It was full of potential instantly. It made an explicit connection to storytelling, narrative and literature and it put me in a position of having to respond to what the nature of the book was, physically as well as its contents, its title.  Rather than working on a blank canvas it was more of a found object that triggered reactions in me. It suited me. It also appealed to a kind of punk iconoclasm in me, to make something through partly destroying it.
Although you also work on large canvases, many of your creations are done on small formats. They accommodate dense compositions. Is this a way of making your subjects more intimate and inviting the viewer to stop and take in all the details?
Scale and size are different things for a painter. A painting might be small but have an inner scale which is huge. intimacy is strongly related to the small scale of the work, the fact that you have to peer into the work. Paradoxically perhaps, I generally work much more intensely on the small paintings, they often take longer and are more densely composed, and more detailed even though I have less room literally, they are sometimes claustrophobic. The larger paintings open up space and a lightness for me; lightness is hard to do well, and for someone like me who was schooled in hard-won painting it has taken a long time to accept, to allow myself. 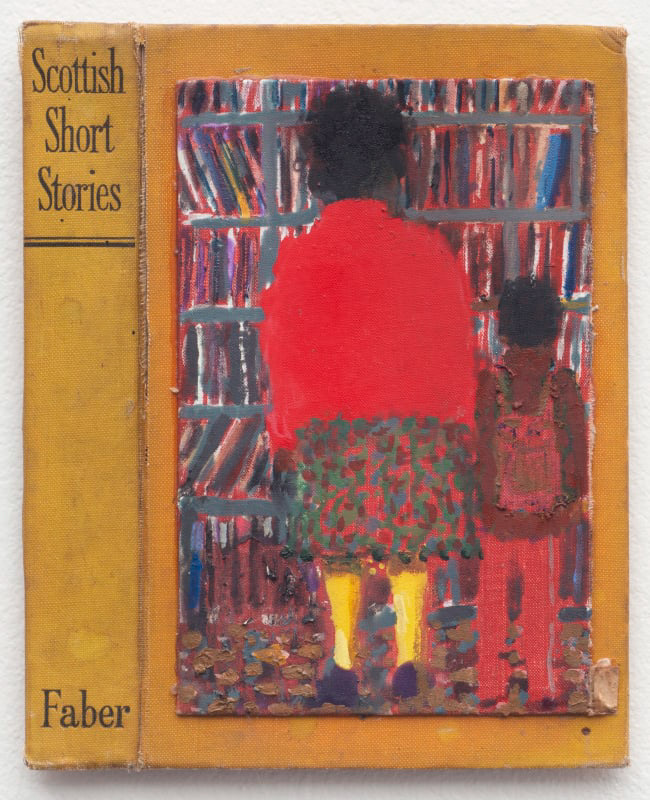 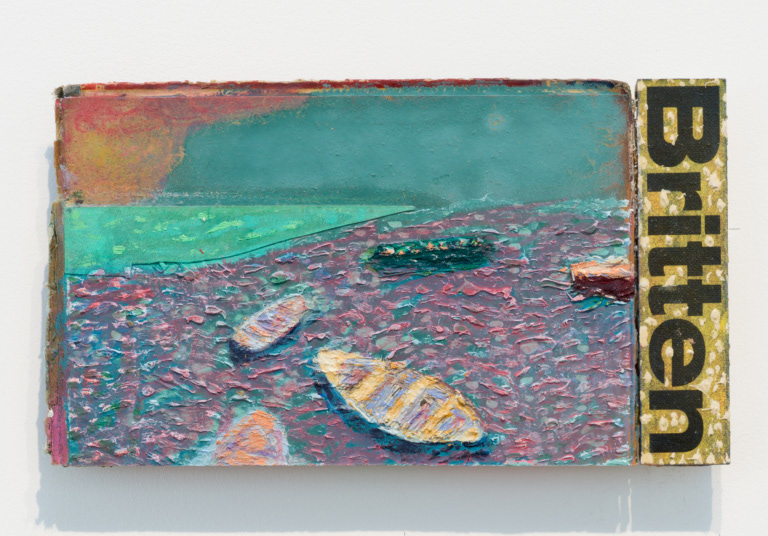 Previoulsy I compare your work to Vuillard’s and Bonnard’s ones. What are your main artistic influences ?
I hardly know where to start, There so many and at different times some have been more important than others, and for different reasons. I like the wide ranging scatterbrained approach of RB Kitaj but also the narrow monasticism of Giorgio Morandi. First loves are important always, things you come back round to- Munch, Sickert. I was thinking the other day of a book I had as a young boy of Edgar Allan Poe stories - I particularly loved horror and ghost stories - and there was illustrations in it by Manet, Redon, Ensor, Gustavo Dore, pretty interesting things to absorb.  Like lots of Scottish painters before me ( especially Anne Redpath and William Gillies) certain French painting has always spoken to me: Matisse, Bonnard, Vuillard, Balthus, Derain.
Studying in London at the RCA. was mind blowing and opening myself up to the influence of a wave of painters dealing with image: Luc Tuymans, John Currin and especially Peter Doig, who was my tutor at the RCA. Doig is the best painter in the world. I very much like the early work of Argentinian painter Guillermo Kuitica.
But often people only think that work that is obviously related to your work would be of interest, but actually you find yourself often stimulated and nourished by artists that are very different but you like the spirit of their work, their approach and their qualities, and in this way I often turn to Alan Davie, William Scott, Sigmar Polke, Mark Rothko, Helen Frankenthaler, Philip Guston, Max Beckmann. 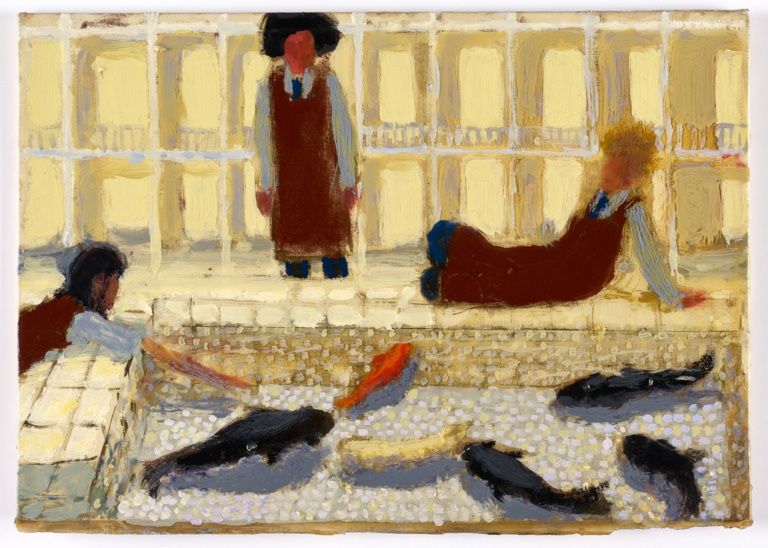 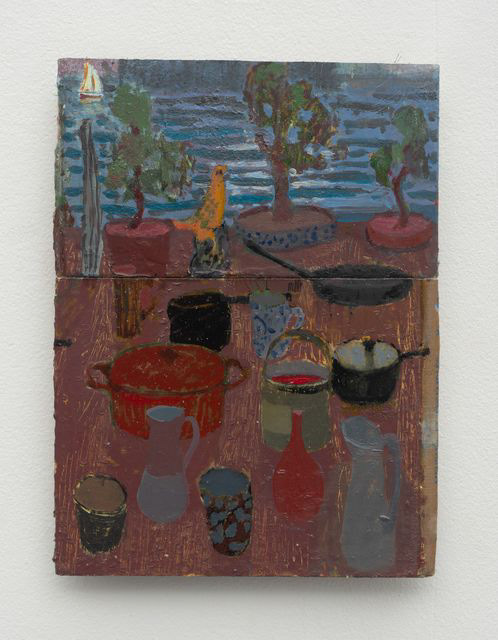 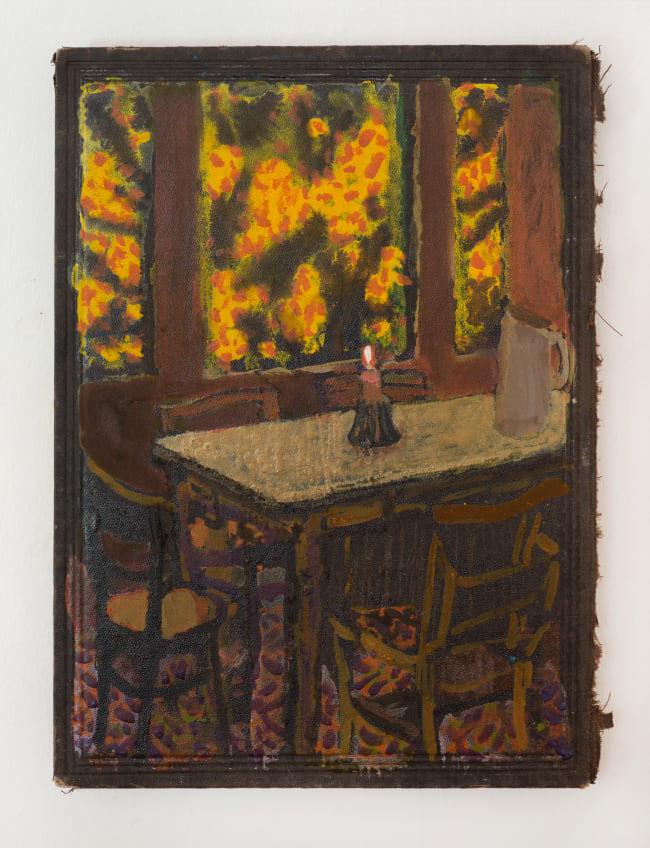 ‘Wept for a day gone by’, pigment and gum Arabic on hardback book cover. 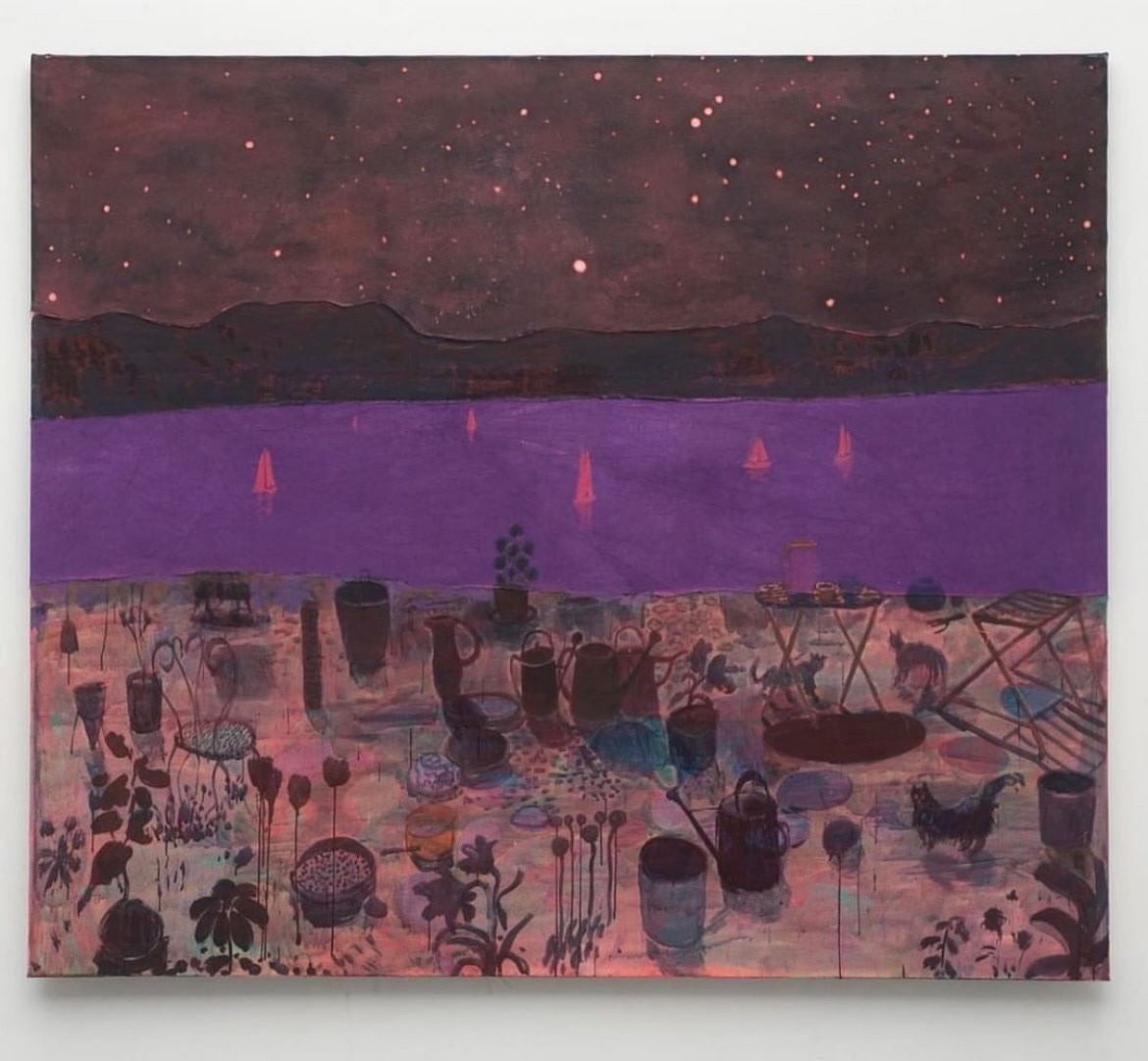 Something of the night, distemper on canvas, 2021